The bunch of meditators who met up in the hallway of Cathedral Buildings last weekend were a motley crew who included a Brazilian, an Austrian, a Scot, a Canadian, a Mancunian and an Italian; marathon runners and mountain walkers; and ranging in age from a retired Ulster University art professor to two undergraduates. These 12, snug in anoraks and bearing knapsacks full of food, were bound for Rathlin, a tiny island reached by a 45-minute foray by ferry from Ballycastle. We were spearheaded by Paula, who, tutored by her many holidays there, knew the vicinity like the back of her hand.

There were three drivers, one of whom – Tony, the astute engineer, wise in the ways of cordoned-off roads – gave instructions as to the best route out of town. And so we were off, travelling in convoy, back-seat passengers checking those behind were up to speed with “There they are!” or “They’re coming!”.

Inside the cars conversation never lagged, mainly about Rathlin and its chequered history. Marconi – the eccentric Italian whose prolonged experiments there makes it possible to hear The Archers – got a mention, mainly because of his Irish mother. But the most intriguing tidbit about the place (thank you, Tony) related how, during a conflict about its ownership, Rathlin was finally deemed part of the island of Ireland… because of the absence of snakes! It was a lovely journey and hardly had we savoured James’s witticisms than we were there.

Cars parked, together again, we watched the ferry arrive gracefully and were agog to be on and gone. It was at this stage that Fate decided to drop the banana skin and hammer home a reminder about the best-laid plans of mice and men. The sea was pronounced choppy. We could go over if we wished. But our return that day could not be guaranteed. Oh Thebes, oh Sparta! We consoled ourselves by having coffee in a cafe. 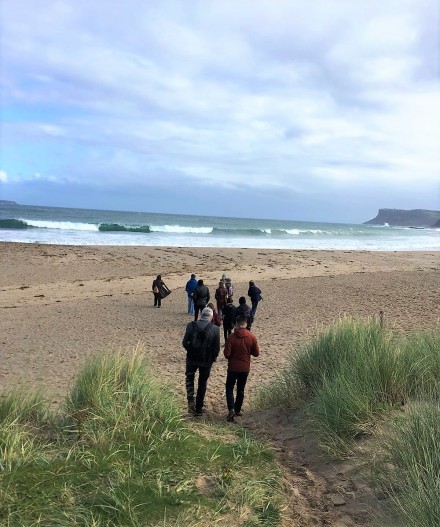 The walkers set forth

All was not lost, however. Our resourceful leader (it’s not for nothing that the initials of her name are P.M.) considered that the Corrymeela Reconciliation Centre was near enough to visit. Maybe we could soft-soap them into letting us eat our picnic there. Corrymeela said we could come but promised no further concessions. And so we set off to walk, over the beach, with the tide coming in, foaming white and gentle. What a pleasant trek that was as we all stuck together, little knots of twos and threes unravelling and re-forming differently as we strolled amid the local Sunday dog-walkers. 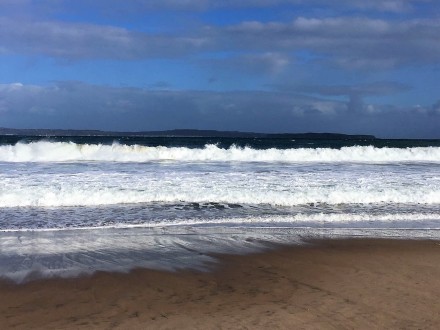 The glorious view as we walked along the beach

The water spread out shallow tongues as if intent on licking us but we scampered out of its way, all the time glorying in the boom of the sea, the soft clean sand, the long cords of seaweed lying everywhere, tree stumps, seashells and stones. We stopped to have photographs taken and James was still way out and up high on big black rocks assiduously photographing when Paula signposted the grassy path that would take us to Corrymeela. And so having braved the steep bank we stepped it out, on the wrong side of the road, a short distance (but with lots of traffic) to Corrymeela.

Our arrival at Corrymeela had a certain significance for it had been the location of the first BMZC sesshin with Paul Haller . .. and here we were, some 20 years later, once again, entering its peace-making precincts. Djinn, our teacher, had been among the attendees then, and Frank, one of our co-founders … and I thought sadly of poor dead Liam and how, like me, he’d arrived without a towel.

But the spartan accommodation we’d then experienced had been the acorn which had meanwhile grown into the most amazing oak, with luxury all the way. Gone were the bunk beds and shared rooms. Now there are single rooms, each with its en-suite. And what a marvel of design and colour and cleanliness and good taste has emerged from the chrysalis we then knew. Stained glass of staggering beauty. Modern efficient furniture in the brightest colours. Carpets in the corridors of startling design. A cross of gleaming nails in its own little alcove in the wall, imitating a relic of the war- bombed Coventry cathedral. A lovely painting of a Swanson bicycle at the entrance. Everywhere, everything cutting-edge, awesomely attractive. One room even had its simple furniture arranged like a mandala, a circular table surrounded by a circle of colourful square cushions inside a ring of chairs around the wall … not to mention the view of the sea from huge expanses of window. A poet could not but be glad in such glorious environs.

Our tour of Corrymeela Reconciliation Centre

We were served tea-coffee-biscuits and then taken on a tour of the grounds by a genial young man from Birmingham. He told us how the place had been the brainchild of the late Ray Davey, an army chaplain and Methodist minister who had witnessed the inferno of Dresden – an experience which had hammered home for him the do-or-die importance of reconciliation.

In a workshop window we saw a wonderful bicycle fashioned from toilet rolls and such (though it was not rider worthy!). We saw the magnificent grounds where efforts are being made to reintroduce wildflowers and birds that have been polluted away. We saw a plain cross positioned under a tree, for the place is very Christian. We saw a garden with shapes in its seating and walkways that can only bring balm to the spirit.

Back inside, we put questions as to the accessibility of this mind-blowing gem for a group like our sesshin. Yes, we could be accommodated – and gladly. But nobody dared inquire about the tariff!

We left Corrymeela with regret, although we were hungry now and the motion on the table suggested we dine in the cars, their backs open to promote inclusion. But once again Paula pulled the rabbit from her hat. She inveigled the tourist office at Ballycastle to let us have use of a room … which amounted to water, kettle, cups, plates, cutlery and tables. No squat diner for the BMZC members! Not to mention a display of food that Harry Potter might have envied. And so we feasted.

Our final feast at the tourist office in Ballycastle

For some the return journey was from A to B. But Tony knew of a long way back which we took, making an evening of it and stopping at a watering hole in Cushendall, halting again for James to buy bags of dulse and drawing up at a later stage at a long bridge to have a better look at swans lording it over a lovely river.

Then back to basics as the city slowly enveloped us in our everyday environment. Not a soul at BMZC. Or the bus stop. Yet the 40-minute walk home, weighed down by the residue of lunch, did nothing to mar my delight in the day. The puffins in Rathlin can wait for the next time.

2 thoughts on “Our Sangha Outing, by Carmel McQuaid”

This site uses Akismet to reduce spam. Learn how your comment data is processed.